The three-word phrase of the day is also the question all Buffalo Bills or Philadelphia Eagles fans or futures bettors have to be asking themselves: Trick or treat?

It certainly feels like pure treat through eight weeks of the NFL season, almost to the point where the Bills and Eagles meeting in the Super Bowl is a fait accompli. Both teams waltzed to victory Sunday as 10.5-point home favorites (yes, Bills-Packers counts as a waltz, backdoor cover be damned), and now they take to the road in Week 9 giving 13 points apiece! (Give or take a half-point, depending on the sportsbook.)

The sportsbooks certainly see the 7-0 Eagles and the 6-1 Bills as the clear favorites to play in Glendale, Arizona, on Feb. 12. Consider these Super Bowl matchup odds offered by BetMGM: 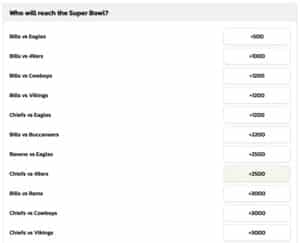 A payout as low as 5/1 on an exact Super Bowl pairing before the midpoint of the season is rare. The odds double to 10/1 for the next most likely matchup, and you get all the way down to 25/1 before you find one that features neither the bison nor the birds.

But the early dominance of Philly and Buffalo could be a trick, not a treat. We all have short memories, so here’s a handy reminder. Entering Week 9 last year, the Bills and Bucs were the favorites to win the Super Bowl at +500 and +600, respectively. They both lost in the divisional round of the playoffs. The Rams, who won the Super Bowl, were third on the odds board at this point last season, at +750. Their eventual Super Bowl opponent, the Bengals, who came within a play or two of winning it all, were in a seven-way tie for the 12th-best championship odds at +5000.

It’s a long season, and one key injury can change everything. Even assuming perfect health, all it takes is for one team to come out of its first-round playoff bye a little out of sync and it could be gone.

For now, though, two things we can be fairly confident of are the Eagles staying unbeaten for another week and the Bills remaining in pole position for the AFC’s top seed for another week. Even though both are on the road, each is favored by nearly two full touchdowns in Week 9.

The Eagles play Thursday in Houston — who knew Philly vs. Houston would be such a big first-week-of-November sports rivalry? — and are giving 13 or 13.5 points, depending on the sportsbook. The Bills take on the AFC East rival Jets on Sunday at Met Life Stadium and can be found at -13 or -12.5, numbers that were probably poised to be a bit smaller until Zach Wilson got confused this past Sunday about which color uniforms he was throwing to.

These are massive spreads to count on road teams to cover. But the Eagles are 5-2 against the spread this season, and the Bills are 4-2-1 ATS. The Texans couldn’t cover Sunday against a Titans team that essentially decided to play without a quarterback. The Jets have a QB controversy that features the name “Joe Flacco.”

Let’s take a look at the rest of the opening lines and assorted betting odds and ends for Week 9.

Most lines vary by half a point in either direction, with slightly different vigs from book to book, so it’s always advisable to price-shop at all the available mobile sportsbooks in your state. But here are the consensus (most commonly found) spreads for each of the 13 games in Week 9 (the Cowboys, Giants, 49ers, Broncos, Browns, and Steelers all have byes):

I’m just going off my own reactions to the opening lines and saying that the Cardinals-Seahawks and Chiefs-Titans lines both surprise me.

Look, Seattle may not be a Super Bowl contender, but they’ve proven their success is not a fluke — neither is Kliff Kingsbury’s ability to guide his team to close losses. The ‘Hawks won this matchup 19-9 at home three weeks ago, and now they’re nearly a field goal underdog in Arizona? Look for that line to tighten up.

And I have to figure the Chiefs line will drop a point or so against the under-respected Titans, especially if there’s a decent chance Ryan Tannehill returns from injury/illness.

This is getting ridiculous. At least that’s what I think I’m supposed to say in order to make it a bit more humblebraggy, as I note that my gold-medal picks in this section of the column are now 6-1 on the season, thanks to the Broncos (+180) beating the Jags in London to kick off Sunday’s NFL action. You’re not supposed to go 6-1 on plus-money wagers. You’re not even supposed to go 4-3. But here I am, making my followers filthy rich. And I don’t even have a nickname like “Vegas Eric” or “Red Hot Rasky.”

Anyway, here are this week’s best underdog values. All you have to do to increase your bankroll is fade the first two and tail the third.

Bronze medal: Titans +430 (Caesars) at Chiefs. It’s not easy to bet against Andy Reid off a bye or against Patrick Mahomes under any circumstances. But year in and year out, the Mike Vrabel-Tannehill combo finds ways to win in spite of nobody taking them seriously. The Titans have won five of the last six meetings between these teams (a fairly meaningless stat due to roster turnover) and thumped K.C. 27-3 last October (not so meaningless). This +430 price won’t feel like value if Malik Willis plays, but it’s way too long if Tannehill is good to go.

Silver medal: Falcons +140 (Betfred) vs. Chargers. The formula is simple: The Chargers are banged up and find ways to lose, the Falcons believe in themselves and find ways to hang around, they’re both four-win teams, and we can get plus money on the home squad.

Gold medal: Seahawks +120 (PointsBet) at Cardinals. Is it cheating, trying to preserve my gold-medal underdog record by picking a ‘dog that’s barely a ‘dog and probably shouldn’t be a ‘dog? Yeah, kinda. But I don’t care. Seattle wins this one outright. You’re getting the Red Hot Rasky guarantee on that one.

Pick three (or more), pick 6 points or 7 (or 6.5), and let the sweating of a +140 or so return begin. For reasons outlined above, I wouldn’t include Kansas City unless Tannehill is ruled out. And even then, the Derrick Henry Express scares me. But Eagles -7, Bills -6.5, and Bengals -2.5? You’re getting to/through some key numbers there with a simple 6-point tease.

Let’s be honest: This is a pretty lousy week of NFL games. A few good teams are on bye, there isn’t a single must-see matchup on the schedule (Bills-Jets and Chiefs-Titans, both of which have double-digit spreads, are the only games pitting two teams with winning records against one another), and the late afternoon Sunday window features only two games, presumably because the schedule makers figured they wanted a bright spotlight on Bucs-Rams. If you’ve been waiting all season for a Sunday off, a chance to do something outdoors-y with the kids or something indoors-y with your significant other, this is it. And if you’re a loner with nobody to do stuff with, there’s a big election coming up on Tuesday. Spend your Sunday reading up on the candidates. Who controls the Senate figures to impact your life more than whether Sam Ehlinger throws his first NFL touchdown.
Which team will finish with the worst regular-season record? FanDuel has the 1-5-1 Texans favored at +125, followed by the 2-6 Panthers at +290. But how about the 1-6 Lions at +600? Their schedule features several softies — hence the medium-length odds — but don’t let preseason expectations of improvement fool you. The Detroit Lions are proven masters of futility. Finishing 1-16 is very much within their range of outcomes.
What even is a Comeback Player of the Year? There’s no agreed-upon criteria in terms of what one should be coming back from. About the only rule is that it can’t be your first year in the NFL — a rule we learned about just recently when Commanders running back Brian Robinson Jr., who was coming back from gunshot wounds, was removed from sportsbooks’ odds boards because he didn’t have a previous NFL season to come back from. The sportsbooks all have the same top four CPOY candidates in the same order: Saquon Barkley (best price: -155), Geno Smith (+260), Christian McCaffrey (+800), and Derrick Henry (+1200). Three of them are elite RBs returning from injury. The other is a QB everyone long ago gave up on who has about as much prior NFL success to his name as Brian Robinson Jr. does. Yes, Smith was down and now he’s up, but was he ever up before as a professional football player? If you were never all that good previously, isn’t “Comeback Player” actually awarding “Most Improved”? As for the three running backs, are we judging based on how badly they were injured, how much time they missed, or how well they’re playing this year? Barkley has 968 all-purpose yards through eight games, McCaffrey has 909 through eight games, and Henry has 893 through seven games. Why is Barkley the favorite and the other two longshots? Maybe Alex Smith needs to take a snap somewhere before the season ends to make this decision easy.