While I’m not sure Paul and co-founder Joey Levy are on their way to reinventing the sports landscape, I figured I’d give Betr a try.

Betr recently released its free micro-betting app, which allows users to bet on individual actions during a game such as pitch-by-pitch results in a baseball game or play-by-play results in a football game. There’s no official timeline for when users can wager real money using Betr, but the free version is available for those wanting to see what the app looks like. I tried the app during Monday Night Football, when the Seattle Seahawks hosted Russell Wilson and the Denver Broncos.

“While this is very much an initial version that will get considerably betr over time, we believe the experience released today provides a glimpse into the future of sports betting in the U.S. — an instant gratification focus to betting delivered in a simple, intuitive user experience that anyone can enjoy, even if they have not bet on sports before,” Levy said in a recent press release.

I’ll admit I enjoyed using the app, but I can also see why some experts consider in-game betting a problem gambling concern. Even when using the free version — the sports betting app provided me with 2,000 coins to wager — I felt uneasy placing so many bets in such a short period of time. I can see how placing dozens of in-game bets could create the tendency to chase bets, and I’d likely need to set a limit on the amount of money I’d be allowed to wager in one game to feel comfortable regularly using a product like Betr.

Fortunately, Betr’s free version did this in some capacity. Betr awards users 2,000 coins when they sign up for the platform, and there’s a 100-coin limit on each bet type per possession in an NFL game. 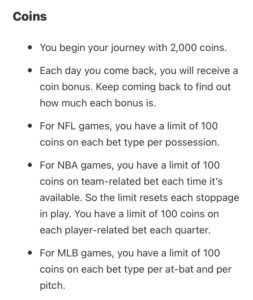 Typically, I like placing pre-game wagers and using my own research to determine which side I’ll take. With in-game betting, I wasn’t using much of any research when placing wagers, so I was essentially guessing on what I’d see next.

This led to some fun wins, like when I took Denver to pick up a first down on a first-and-10 play, and Javonte Williams broke off a nice run to cash my bet. Even without real money on the line, I was legitimately excited when Williams broke a tackle and burst beyond the yellow line.

My guesses also led to some unfortunate losses, as Seattle opted to throw on one first-down play rather than run. I expected a run, but the first-down play gained about eight yards, so it’s probably a good thing I’m not involved in Seattle’s play calling. After the late-game debacle on Denver’s side, though, I feel qualified to be the Broncos’ head coach. 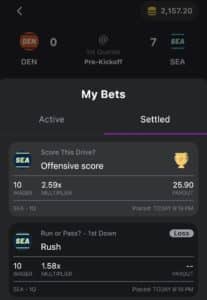 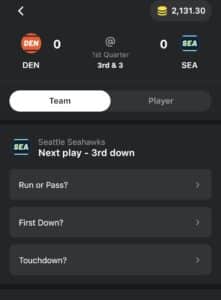 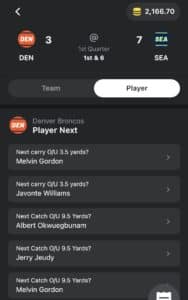 Unlike my usual thought-out pregame bets, I felt as confident in the results of my wagers on Betr as I did in the Broncos making a 64-yard field goal to beat Seattle.

My uncertainty doesn’t mean there can’t be strategy when betting during games. If certain teams prefer to run on first down, there could be an edge on those plays. Certain situations often call for pass plays — for example, most teams obviously go to the air on third-and-long — although the odds given to bettors factor in that sort of information. Understanding tendencies and game flow can certainly help an in-game bettor feel confident.

The interface was easy to use and understand, a credit to the Betr team. It wasn’t complicated, and I can see certain situations when I’d enjoy getting together with friends and betting multiple times throughout a quarter or inning of games. But I’m not sure micro-betting is for me.

Among my top concerns when betting during games is my TV subscription. I use YouTube TV, and I was about a full play behind when using Betr. The app would prompt me with third-down bets, and I was still watching the Seahawks get set for their second-down play.

That’s not Betr’s fault, but I can’t imagine putting actual money down when what I’m watching on my TV is 30-45 seconds behind the app. I used the app a few times during commercial breaks, and I could see myself using it if I’m viewing a game in-person, as it could be fun to place live bets from the stadium.

At the same time, do I want to spend the entirety of a baseball game with friends using a mobile sportsbook to bet on pitch-by-pitch results? Personally, I’d rather drink a beer and eat a hot dog while keeping my phone in my pocket. If anything, I may bet on the outcome of occasional at-bats, but that may be the extent of my in-game betting.

Betr performed well, and it was easy to jump in and start using the platform. My concerns aren’t with usability, but rather my own desire to use in-game betting, and my own ability to bet responsibly during games. The latter seems more important for Betr’s future success, as plenty of recreational bettors are interested in live betting.

“What we launched today is not a sportsbook — this is something new, different, and interesting — which is what this industry needs, given every other operator in the space is essentially offering the same commoditized legacy sportsbook product,” Alex Ursa, Betr’s head of product, said in a release. “Betr is also the first betting app where someone who has never bet on sports before can dive right in and enjoy the experience with no learning curve and we are excited to finally be able to share it with the world.”

I don’t completely agree with Ursa’s suggestion that there’s no learning curve, and I’d argue someone with minimal sports betting experience could lose money rather quickly using only an in-game betting app. The free version does provide a good place for new bettors to practice in-game betting, though. It’s much easier to stomach losing Betr coins than it is hard-earned cash.

If Betr wants to revolutionize the sports betting industry, it’ll need to captivate the fans interested in micro-betting. That seems doable, especially with an easy-to-use app. The bigger challenge might be launching a paid version of the app that encourages responsible gambling practices.