A $75 million sports wagering win can buy you lots of things, but one of them is not instant expertise in the gambling space.

Fresh off receiving his record World Series payout that will put a notable dent in overall nationwide operator revenue totals for November, Jim “Mattress Mack” McIngvale took to Twitter on Tuesday night to offer his thoughts on the pitfalls of playing the lottery. It looked to be inspired by the Powerball kerfuffle that led to a delayed drawing for the record $2 billion prize eventually won by one lucky person in California.

McIngvale’s 10-tweet thread raises good points, legitimate questions, and the occasional eye roll. The last can be partially attributed to industry media fatigue covering his $10 million in wagers and eventual payout, but questioning the efficiency of the lottery and its sometimes unintended consequences of societal damage is fair game.

Threading the needle of the need for increased responsible gaming for lottery products in comparison to sports wagering, however, is arguably better-suited to a different messenger than one who — while clearly wagering within his means as a responsible bettor — is still betting amounts considered life-changing to the general public.

“He’s doing folks a service by raising some of these issues,” said Keith Whyte, executive director of the National Council on Problem Gaming. “But pitting one vertical against another ultimately is not a very good responsible gambling strategy.”

Kid brother turns 46 today down at his group home in Brookwood in Texas. Still my North Star and the human I most aspire to be like.

Loves selflessly and unconditionally… also drinks a shit-ton of soda like his older brother. pic.twitter.com/IJKoGa9Cx8

Before getting into the substance of his thread and this column, a personal disclosure: I have an indirect connection to “Mattress Mack.” My brother Thomas, who is autistic, lives at the Brookwood Community, a private group home outside the Houston area. Both McIngvale and his Gallery Furniture franchise are notable contributors to the success of Brookwood.

McIngvale, who has long-standing ties to Brookwood founder Yvonne Streit, has given the nonprofit retail space in one of his stores. Brookwood’s “citizens,” as they are called, have paying jobs and craft an array of items, including horticulture, gourmet food products, ceramics, stonecast, soap, jewelry, and woodwork available for sale. There is also a restaurant and gift shop on its campus staffed by citizens.

My parents were able to secure placement at Brookwood for my brother more than a decade ago, and the most important decision they ever made has repeatedly been confirmed as the best one, since Thomas is truly living his best life as a special-needs adult. I have not had any direct interaction with McIngvale, with the closest being a quick discussion about Thomas and Brookwood with one of his assistants while at the EGR North American Summit in New Jersey this summer.

Back to the task at hand

One of McIngvale’s criticisms of the lottery was its lack of efficiency when compared to sports wagering. In one of his tweets, he provided two pie charts, one talking about the lower hold taken off the top for a sports betting wager versus that from the lottery. 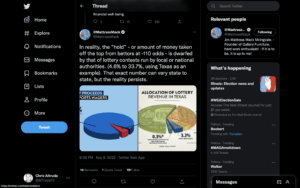 Though the numbers are not incorrect, this feels like “lies, damned lies, and statistics” exacerbated to a degree, considering McIngvale made his World Series wagers in states — Louisiana, Iowa, and Nevada — where sports betting is not lottery-run. (Sports wagering is not legal in his home state of Texas.) Also, a state lottery has a mandate to generate a profit to bolster government revenue.

This often gets lost in the shuffle when it comes to the lottery in general. For example, when the DC Lottery chose Intralot as its trading platform for sports wagering on GambetDC, the former entity was well known for having lines that bettors who line-shop would likely not consider. The DC Lottery, though, weighed that along with the realization there is less money paid out on winning -120 wagers than on -110 wagers.

McIngvale’s second pie chart also undercuts his argument to an extent. Of the 33.2% in remaining money after prizes are paid out, a combined 24.6% goes toward education, veterans’ assistance, and other state-run programs in Texas. That means nearly three-quarters of the overall remaining money is going where it was specifically earmarked.

Additionally, spending only 3.3% on administrative costs is efficient for any business, let alone one that’s state-run. As a point of comparison, West Virginia has 6% of the population of the Lone Star State, yet the state lottery lops off 15% of the gross tax revenue for both sports wagering and online casino gaming to cover administrative costs.

Is lottery marketed to a vulnerable demographic?

Studies show that lottery participation is more common – and more available – among poorer Americans & in poorer neighborhoods, a fact which comes about by design, not by accident. As such, those most in need of the state’s support are instead exploited for additional revenue.

This probably qualifies as the biggest “hot take” of McIngvale’s thread. He does not cite the specific source of the studies, but the subject is broached in Kathryn Schulz’s “What We’ve Lost Playing the Lottery,”  which was published in The New Yorker last month.

Colleague Mike Seely distilled the article into two key points — that the lottery created common ground among the two most diametrically opposed Founding Fathers in Thomas Jefferson and Alexander Hamilton, and in quoting Schulz:

“According to the consumer financial company Bankrate, players making more than fifty thousand dollars per year spend, on average, one per cent of their annual income on lottery tickets; those making less than thirty thousand dollars spend thirteen per cent.”

McIngvale follows up the above tweet with the claim that “Powerball contests and other lotteries are advertised by the states that participate as fast tracks to wealth beyond imagination, while many of those same states repeatedly warn us about the pitfalls of wagering on sports.”

Again, this is not incorrect, but it obscures the fact that sports wagering and lottery are both forms of gambling. That means both — not either — could lead to addiction if done irresponsibly, even with the responsible gaming aspect of sports wagering more front and center because it is still a novelty in the public space.

“Even though we know at the moment sports betting skews higher income, higher education, we also know that gambling addiction in general, and sports betting is no different, you are more likely to have problems if you are male, you are younger, and a minority,” Whyte said. “We don’t say gin is less addictive or less dangerous for an alcoholic than vodka. It’s the issue of how the individual interacts with that alcohol. This line of discussion, taking the extreme, the danger is it can lead people to believe that certain forms of gambling are safer.”

Responsible gaming advocates point to having as much context available as possible for educational purposes, and this instance is no different. Even though McIngvale’s story has evolved from a sports fan who puts down seven-figure bets to a furniture magnate making business hedges via seven-figure bets, the key question in the scope of responsible gaming is how many people know it is the latter.

Whyte noted that “Mattress Mack” has a megaphone because of his winnings, and knowing those bets are hedges put “his astronomically big wagers in a much different context.” Whyte raised another question: Would McIngvale have even written the tweets had the Astros lost the World Series and he simply offset his $10 million gambling loss with profits from the promotion?

The question is moot because McIngvale’s thread is there for public consumption, and we’re here in this space because the thread serves as a teachable moment and reminder that no form of gambling is without risk — both in terms of loss and addiction.