The first thing that comes to mind for most people upon hearing “baccarat” is the iconic opening scene of Dr. No, in which Sean Connery makes his James Bond debut in 1962 and calmly bests Sylvia Trench in multiple hands. Though revisited in 1995 to introduce Pierce Brosnan as Agent 007 in GoldenEye, that first shot of Connery as Bond, lighting his partially dangling cigarette, endures.

One reason the association is so strong 60 years later is because baccarat remains somewhat of a mystery to the general public. The card game associated with high-limit wagering is often out of the eye on the casino floor, which contributes to its wistful romanticism versus the conventional blackjack, craps, and roulette.

In less than 15 months since opening its doors, Hard Rock Northern Indiana has become the dominant player in Northwest Indiana and one of the top destinations in the Midwest for baccarat. Hard Rock accounts for approximately half of the state’s baccarat drop, which is the amount wagered for table games, and revenue from baccarat play has helped Hard Rock create separation from other Indiana casinos as the state’s top revenue generator. To wit, the $6.7 million in exclusively baccarat revenue for July would have led the state in overall table games revenue and was more than half of Hard Rock’s $11.9 million total table games revenue.

“Right out of the gate, we felt something special,” Hard Rock Vice President of Marketing Joe Branchik said in an interview with US Bets at Youyu Noodle, the Asian-themed restaurant adjacent to the casino’s baccarat tables. “I think the Hard Rock brand definitely resonates with the customer. Having the brand new casino in a market that’s been open for 25 years certainly helped.

“It’s definitely a different energy in this corner of the building.”

Team building and side bets 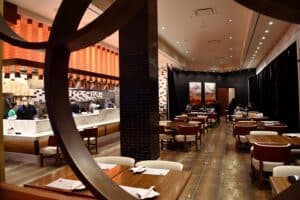 Branchik pointed out that baccarat is a “top priority” for Hard Rock. It is reflected in the layout of the tables, the types of baccarat games available, the types of tables in the high-limit room, having Youyu Noodle in immediate proximity to the tables. There is a specific reason everything in Hard Rock is located where it is in the casino, which caters to a mainly Asian demographic.

“Hard Rock put together a team of casino marketing strategists that speak Chinese, Mandarin, Vietnamese, Cantonese — and that’s all led by Jenny Moy,” Branchik explained. “You’ve really got to understand the customers, and Jenny has been in this market a long time, and our other team members have been in the market as well. Step one was to put together a great team.

“When we first got here, that outside pit did not exist. Our GM was at Ameristar (in East Chicago) and noted that if we were going to go after this business, we needed to take a bigger footprint of the floor and that was how this area was created. It really helped our strategy of filling the area and flowing into the high-end room.”

The majority of Hard Rock’s 24 tables offer traditional and “EZ” baccarat, while some offer the side bets “Five Treasures” and “Blazing 7s” which have proven very popular. “Blazing 7s,” in particular, has been a huge draw, offering the potential of a $100,000 payout with a maximum bet of $500 coupled with a 200-to-1 payout. Table limits ranging from $25 to $25,000 per hand, including a minimum $100 per hand in the high-limit room, have contributed to Hard Rock averaging more than $1.1 million in drop per table per month in each of the first seven months of 2022.

Branchik credits the side bets as being a key driver “that’s captured the younger audience and other cultures in really becoming fascinated with the game.”

‘In the evening, when it is busy, it is loud’ 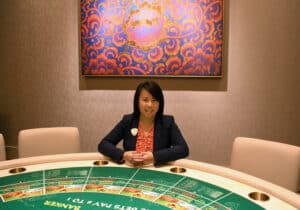 Jenny Moy is Hard Rock Northern Indiana’s director of Asian player development. She knows the Northwest Indiana gaming region as well as anyone, with previous stops at Ameristar Casino in East Chicago and Horseshoe Hammond. She is equal parts floor director and ambassador, and she makes Hard Rock’s baccarat scene run smoothly for guests and staff alike.

“For us, it’s really teaching the team members, some of them who may not be Asian, that they understand how we can make sure [bettors] enjoy the game,” Moy said during the interview at Youyu. “That they’re comfortable, they’re respected, and it’s all part of the culture that we promote here at Hard Rock. Our team, marketing, and player development work very close with the table games department. We wouldn’t be successful if we didn’t work together with all the other departments to make this happen.”

Outside the casino, Moy is actively engaged in ensuring Hard Rock has a presence in the community through various Asian-themed and charitable events. That comfort and respect she talks about providing bettors on the floor starts with Moy and filters through her staff.

On a Saturday night, she is all things to all people — listening to player issues about game play and either addressing them directly or bringing in a pit boss to help find a resolution, or troubleshooting reward redemptions so members can use vouchers at Youyu. Even her simple smile and a familiar face for frequent baccarat players means something. It helps manifest into direct conversation, which is sometimes challenging to initiate for customers when English is not their primary language.

“It’s very important we find someone who speaks the languages, who understands the culture,” Moy said in what. she looks for when it comes to staffing baccarat. “Customer service is always our number one priority. All of this is taken into consideration during the hiring process. It’s such a unique experience over here (the baccarat area) that I think the human touch is very important. To talk to people, to be face-to-face with people — it’s truly important all over the casino as well.”

The importance of Hard Rock’s layout becomes immediately apparent during a Saturday night. The table area in the main part of the casino floor has $50 minimums per hand, the high-limit room $100. On this evening, the main area is closer to capacity than the high-limit room, but both areas have a buzz of activity, while there is a constant shuffle in and out of Youyu Noodle.

Also important are the people standing behind those seated and playing. The first takeaway is baccarat is very much a communal, “us versus the house” table game. Most people who play have come to the casino together and are always within orbit of each other, albeit while not always playing with each other. Bystanders occasionally add to the table action if they sense a run of sorts is coming, which is aided by electronic displays that show previous results of player versus banker.

The side bets further add to the drama and tension, as does velocity of play. The usual pace is between 30 and 40 hands per hour, and is slightly faster in the main area. That means both areas are generating a at least a six-figure drop every hour when full. The main area has a standard table with six positions, while the high-limit tables seat eight. These tables are custom-made for Hard Rock, and similar to those used in Macau for a closer interaction between player and banker.

Play then picks up at that hot table both in volume and size of wagers. When a second big wager hits, the cheers are audible in that entire section of the casino, and the crowd can swell to three-deep around the seated players, all of whom are hoping for a little luck to rub off. When the run subsides, people migrate to the high-limit tables in hopes of creating another such moment, sustaining the cycle of play.

The short and long-term competition

Though Hard Rock is the unquestioned leader in Northwest Indiana, both Branchik and Moy are anything but content. Branchik pointed out “no one in this market has ever sat back and let you take it from them,” noting adjustments both Ameristar and Horseshoe Hammond have made with more aggressive promotions and incentives.

Moy focused on internal amenities — there will soon be a cashier cage in the high-limit room for further privacy, which makes sense given the large sums of money players can win.

“What do we need to continue to stay competitive in this field,” said Moy. “Great additions are coming. [We’re] constantly trying to adapt to new trends. Once we get those [add-ons], I can see us surpassing a lot more just because of the changes.”

Branchik also has his eye on Chicago as Bally’s takes its first steps to open a downtown casino. He said that prospect “keeps me up at night,” even though Bally’s will not open its permanent venue until 2026 at the earliest. Branchik added that Hard Rock will face competition from the north and the south, as Wind Creek has already broken ground for a casino in Illinois‘ south suburban Cook County that’s slated to open next year.

But considering how it helped grow the baccarat market since opening in May 2021, Hard Rock is well-positioned to take on all comers. Branchik feels “there is still a higher end of untapped potential to this,” and though that growth caught him by surprise, it also means he, Moy, and their teams are doing many things right.

“I think it’s the sum of all the parts,” he said when it comes to why Hard Rock has been successful. “There’s not one silver bullet, but we’re very mindful and thoughtful of our programming. All of it has to work together. … Live entertainment every weekend, it’s bright, it’s lively, our restaurants are always open. We’ve created an entertainment destination.”