Hoping it will be “The Flame” that draws patrons to northern Illinois, Hard Rock and local ownership group 815 Entertainment broke ground Wednesday on a $310 million casino in Rockford that is scheduled to open in late 2023.

“From the moment we’ve stepped foot in Rockford, the support we’ve received is overwhelming,” Lucas told those in attendance. “The community has truly embraced us and we are so grateful. Today’s event is a great step forward but there is so much more to come. We’d also like to thank our partners, who have been engaged with us every step of the way.”

Rockford was one of six locations granted a casino license in the 2019 gaming expansion bill Illinois Gov. JB Pritzker signed into law that also legalized sports wagering in the state. Hard Rock was the first to receive Illinois Gaming Board approval as “preliminary suitable” and the first to launch a temporary venue, which opened last November. Despite the Opening Act offering only electronic gaming and slots, the venue has generated $43.6 million in revenue in its first 10 months of operation, including $35.1 million through the first eight months of 2022.

Further down the road, Hard Rock will eventually have competition from Ho-Chunk Nation, which is expected to break ground next year for a casino in Beloit, approximately 25 miles to the north in southern Wisconsin. 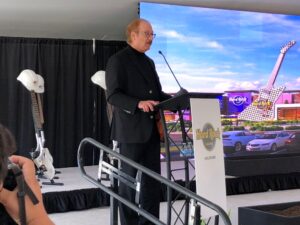 The construction of Hard Rock’s permanent Rockford venue is expected to generate approximately 1,200 jobs, while the casino itself will have approximately 1,000 full- and part-time jobs, with full-time employees having the potential to earn $55,000 annually.

The temporary venue has approximately 300 employees, meaning a large-scale ramp-up remains. During his remarks, Lucas spoke of the importance of raising the starting hourly wage for non-tipped employees, which is expected to add $2.2 million annually to Hard Rock’s payroll and will impact an estimated 44% of its workforce.

In the community, Hard Rock and the city of Rockford have teamed up to form Rockford Promise, which provides full-tuition scholarships for local students to attend nearby Northern Illinois University in DeKalb. Funding has already helped pay tuition for 250 students at NIU, 70% of whom are minorities and 63% of whom are first-generation college students.

“The partnership between Rockford and Hard Rock is more than just another business coming to town, it’s an investment in our community,” McNamara said. “The new casino will make Rockford a destination for visitors who will shop in our stores, eat in our restaurants, and stay in our hotels, all while helping create thousands of jobs for our residents and making a significant positive impact on our community. We are so impressed by Hard Rock’s dedication and commitment to our community, and it shows the type of partners they are.” 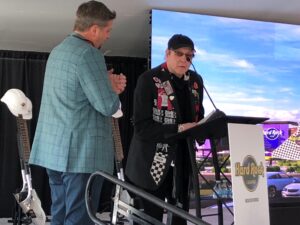 Hard Rock Casino Rockford is expected to have approximately 2,000 gaming positions, including more than a thousand slot machines and a retail sportsbook.

Hard Rock submitted applications for both retail and mobile sports wagering last week, and casino President Geno Iafrate confirmed that there’s space in the temporary venue for a retail book. There will also be a Hard Rock Cafe among six dining options, as well as Council Oak Steaks and Seafood and a 1,600-seat entertainment venue.

Nielsen, who along with his wife were instrumental in helping bring a casino to Rockford, was instantly recognizable with multicolor, fluorescent sneakers and a Cheap Trick-motif jacket. His iconic checkerboard pattern will adorn the guitar — Hard Rock’s traditional beacon for casino gaming — that will be visible to motorists from Interstate 90.

“I have called Rockford my home for my entire life and I’m so thrilled to see Hard Rock install a little piece of rock ‘n roll in my backyard,” he said. “I’m so proud to support this project because of what it means to me, the city of Rockford, and the entire region. There is a lot to look forward to and I’m sure I can find a guitar or three to display once this casino is up and running.”