Standing in the Morongo Casino in Cabazon, California, last month, I couldn’t make sense of it. There was an electronic craps table, people were throwing dice, but whatever the roll, it somehow didn’t become the point. And there was no reaction when the dice settled on the table.

After watching a few rolls, I realized that this tribal casino had found a workaround to have craps and incorporate one of the newest casino games on the market — “Roll to Win Craps.” In California, ball and dice games are banned in tribal casinos. But the tribes have long since found creative ways to host some version of the most popular of those games — roulette and craps. Combining a simple deck of cards with the latest technology is only the most recent way.

The electronic craps tables, developed by Aruze Gaming, made their debut in Las Vegas in 2021 at Harrah’s Casino on The Strip. Two Seminole Hard Rock properties in Florida were the first to have the games the year before, according to a company press release. They’re available to play in at least a handful of California casinos, including three Harrah’s properties, Morongo, and Sycuan. The tables have individual player terminals and require fewer dealers.

While a traditional craps table is covered in felt and relatively quiet until a point is made or busted, this version of craps is visually noisy from start to finish. There are colorful graphics wishing the shooter good luck, announcing the point, or highlighting where a bet has been placed. And sometimes, the table lights up with fire.

While a standard craps table requires three croupiers — usually one to manage the dice, flanked by two to monitor and manage bets — Roll to Win Craps requires only one, as players place bets through terminals around the table. At the Morongo Casino, the minimum was $10, but that could be spread over the table.

Players can personalize terminals with their name and place bets by touching a screen that shows a graphic display of the table. Once a player has funded his or her account, they select the amount and location of the bet on the touchscreen. When the bet has been placed, an electronic beam emanates from the player’s terminal to show the bet on the table. And the point pulsates, so there’s no “on/off” button like in a traditional craps game. 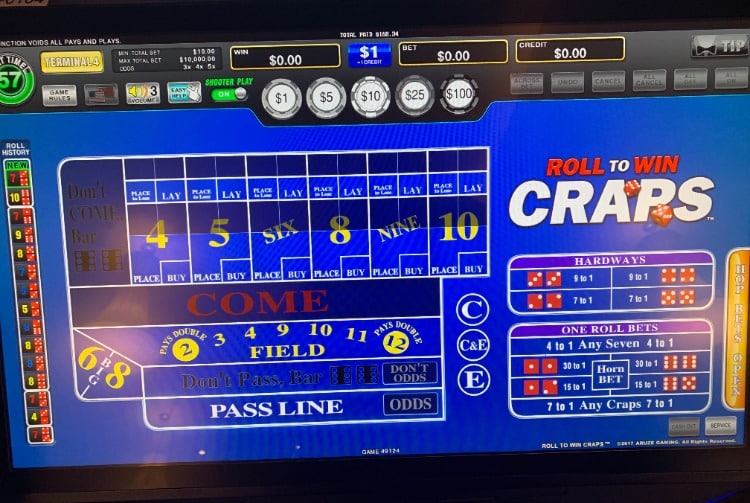 The touchscreen eliminates late bets, confusion about where a bet was meant to be placed, and any other issues that could be created by human error. It also eliminates chips, which for me is a big part of the sensory experience of playing in a casino. The screens also seem to eliminate the personal contact often found at craps tables. With each player standing at their own terminal keying in bets, there is no leaning, throwing, encouraging, or incidental contact.

Once the screen is closed to betting, the shooter receives the dice and is free to roll. Here’s where things get a little hinky — if you’re used to the bouncing and settling of dice on a felt table with bumpers, be prepared. On an electronic craps table, depending on how the dice land there could be no sound, a sound sort of like glass breaking, or some combination of the two.

At a commercial casino, when the dice settle the croupier must manually key in the number on the dice on a computer that feeds information to the table, then the table flashes up various messages — for example, the point, if one was made, a “place your bets” message, “good luck shooter,” etc.

From there, other than the weird sound of the dice hitting a video screen rather than the muted sound of dice on green felt, the game is essentially the same as the craps we’re all used to.

Cards slow down the game

As noted above, ball and dice games are prohibited at California tribal casinos. Proposition 26, which would legalize sports betting among other changes to legal gambling, could alter that. The proposition is one of two relating to wagering that will be on the November ballot, though polling suggests that neither is likely to pass.

For now, gamblers can play “California Roulette” or “California Craps,” both of which have specific rules laid out by the state’s Division of Gambling Control and involve the use of cards.

The tribes currently get around the “no ball games” in roulette by using a round device that resembles a roulette wheel but uses a 38-card deck, “one of which is ejected from the shuffler last after the draw is taken.” The dealer spins the wheel — there is no ball — and pulls the card from whichever slot lands on the winning arrow. Think the “click, click, click” of Wheel of Fortune rather than the clattering and bouncing of the ball as it lands.

Similar to that, the Morongo Casino, like other tribal casinos wanting craps, had to find a way around its being a “dice game.” In some cases, craps is played only with cards used to determine the point. But more recently, casinos have adopted the idea that the dice be used as “random number generators,” meaning the number on the dice is not the point. Tribal casinos employ this method on traditional as well as “Roll to Win” craps tables. 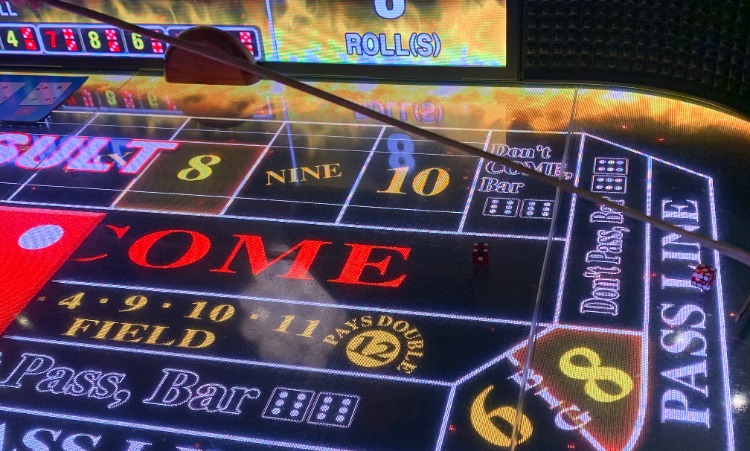 For the first few rolls I watched, I couldn’t figure out why patrons weren’t groaning at 7s or cheering for 6s and then adding more bets. In fact, there was near silence after each roll. The reason is simple: The dice don’t determine the point. Rather, a row of cards in front of the croupier does.

The game is slower than traditional craps, and the day I was at Morongo Casino, it appeared the croupier was in training, making the game even slower. Croupiers must manually key in the numbers generated by the card combination — and that’s after reading the dice and pushing down the cards. So the speed and adrenaline generated by a traditional craps game doesn’t exist.

On a traditional table, either using the card method or the dice as random number generators, the action is faster as the numbers don’t have to keyed into a computer.

But on balance, for the casual bettor, the money lasts longer with this slower version, and there’s fun, just of a different kind.