Just days after Aaron Judge became one of 140 players to file for free agency, DraftKings has released odds on where the superstar slugger will wind up signing this offseason. As often happens, the well-financed incumbent is a fairly sizable favorite.

On Tuesday, DraftKings installed the New York Yankees as its top choice, putting their odds of signing Judge at +165, followed by the San Francisco Giants at +300, the Los Angeles Dodgers at +450, and the New York Mets at +1000. 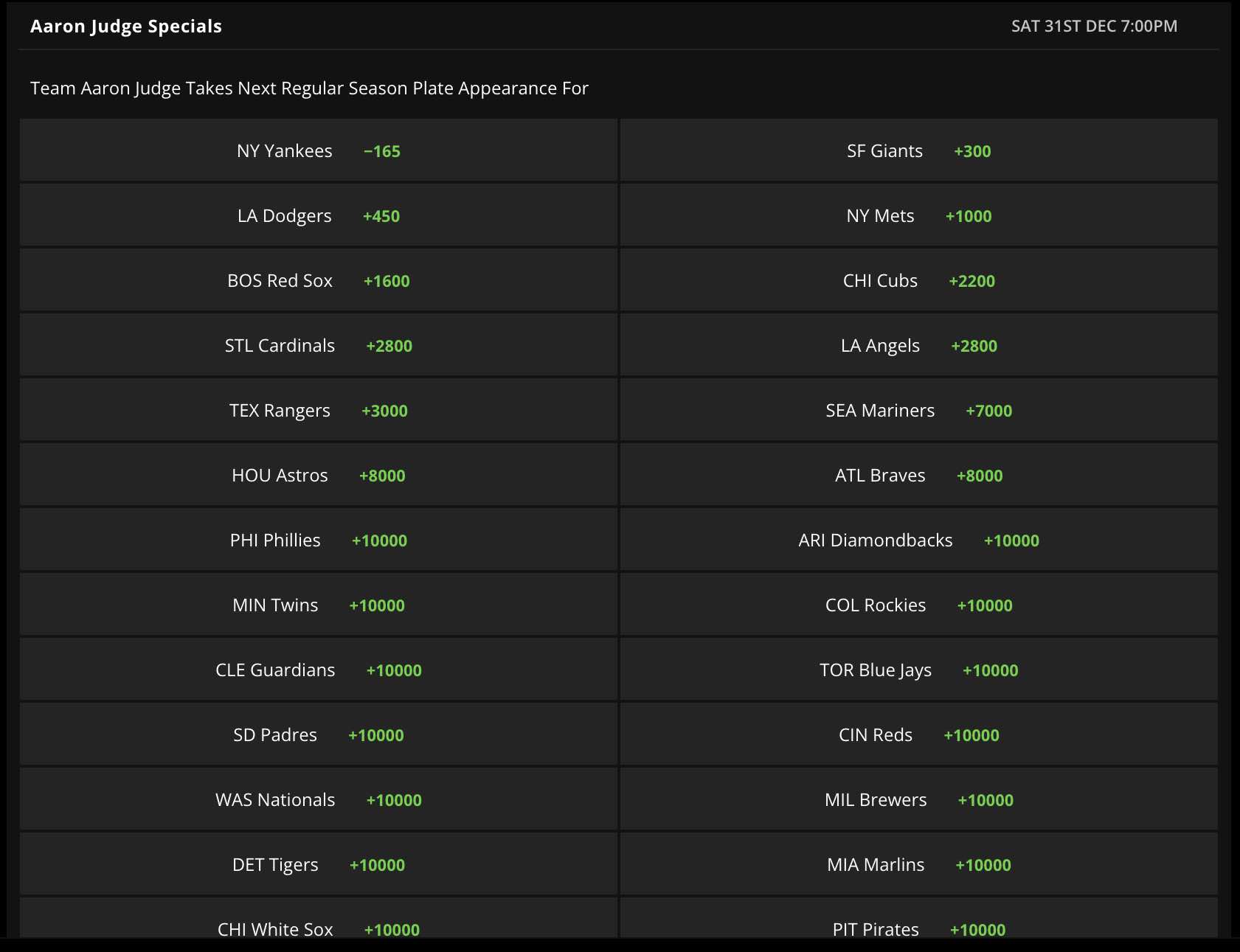 If you like the Yanks’ chances to keep their record-breaking slugger, you might want to act fast. Now that he’s waited this long, he’s probably curious to see what other teams think of him, so the Yankees’ best bet is to get it done with a massive offer before the courting process really gets underway. Yankees general manager Brian Cashman, whose own future has yet to be settled, said as much when he addressed reporters following the team’s loss to the Houston Astros in the American League Championship Series.

“He’s going to dictate the dance steps to his free agency because he’s earned the right to get there,” Cashman told reporters. “We’ll see how it plays out. He’s the most important. If he came in here today and said, ‘I’m signing up. Let’s go,’ there’s still work to be done.”

For now, it seems at least possible that Judge leaves, and sportsbooks clearly thinks he’ll be in a California state of mind if he does. Judge grew up in the San Joaquin Valley, roughly 100 miles east of San Francisco, and attended Fresno State, roughly halfway between the respective sprawls of the Bay Area and Southern California.

Let’s zero in on a few possibilities.

Cashman offered no comment when reporters asked if he had engaged Judge’s representatives on a new contract and, ultimately, this deal figures to be the call of the ownership group headed by Hal Steinbrenner. What’s unclear is what kind of relationship the team and Judge have after he rejected its seven-year, $213.5 million extension offer in spring training — after which Cashman took the unusual step of announcing the terms of the offer.

Everyone in baseball knows the Yankees simply operate by different rules than any other team, so ultimately it feels like they’ll retain Judge if they really want him. But the fact it has gotten this far certainly raises the question of how much they value him.

Considering Judge just had one of the greatest seasons in American League history, mashing 62 home runs to go with a 1.111 OPS and (most likely) an MVP award, what would it take to keep Judge from peeking at other teams’ offers? Presuming they stick with a seven-year deal, would $245 million get it done? That would put Judge just under Mike Trout’s annual salary of $37.5 million and at least be a conversation starter.

Judge’s Northern California roots aren’t the only reason many people think the Giants will take a serious run at him. The team is coming off its worst-attended season since 2000 and has seen its season-ticket base cut in half over the last four years, with the Golden State Warriors’ move to a nearby arena cutting into sports fans’ disposable income pie.

Judge, who grew up a Giants fan, would be a huge draw for a team desperately looking for a post-Buster Posey face of the franchise. San Francisco also has the financial wherewithal, with only about $100 million committed so far to its 2023 roster.

If they really want him, the Giants will be serious players for Judge. It’s certainly in his agents’ interest to keep the team interested. It also seems eminently possible that president of baseball operations Farhan Zaidi would choose to acquire several players for the price it would take to land a 31-year-old slugger who’d be taking his cuts in a stadium that frustrates power hitters as much as any in the game.

MLB.com’s Mark Feinsand reported that the Dodgers figure to be serious suitors for Judge and that the team has discussed moving Mookie Betts to second base to accommodate the addition. That’s a rumor that’s difficult to discount at this point.

The Dodgers are the one team the Yankees might not be willing to out-spend, and they’re getting plenty of salary relief with the presumed departures of free agents Trea Turner, Justin Turner, David Price, and Craig Kimbrel. While Betts is a five-time Gold Glove outfielder, he’s such a good athlete that few on the Dodgers seem worried about such a transition. He played seven games at second last season and routinely takes ground balls at the position.

At +450, this is a price that might be too good to pass up on a team that tends to get its man.

There’s always that team that jolts the winter meetings with a spending spree from out of left field. It certainly seems like a team nobody is talking about will make a run at Judge. And, even if they don’t, his agents will certainly try to stoke the market at some point by floating the introduction of a mystery team.

The Mets (+1000) would love nothing more than to benefit from the Yankees’ loss, and the five-year, $102 million deal they just cut to keep Edwin Diaz doesn’t figure to stop new owner Steve Cohen’s quest to have the best team in the five boroughs. If ace Jacob deGrom signs elsewhere, the Mets might feel particularly compelled to chase Judge in order to keep pace with the Braves. This feels like an excellent price.

The Cubs (+2200) are a sleeper here, as they have made noise about being willing to spend this winter — though their roster certainly doesn’t look like it’s one slugger away from contention, and the last outfielder they spent copiously on, Jason Heyward, didn’t work out too well. The Cardinals (+2800) will probably draw a little action, too, as they have also said they’ll increase payroll. But with Paul Goldschmidt and Nolan Arenado already their two highest-paid players, they probably aren’t in the market for another right-handed power hitter.

As for the Red Sox (+1600), they seem to be among the favorites mostly because they’re the Yankees’ arch rival. Most insiders consider them more likely to concentrate on holding on to Rafael Devers.