For all the talk in Chicago around Bally’s and its $1.7 billion proposal to build a casino in the River West neighborhood of America’s third-largest city, the planned racino eight miles to the southwest may have more riding on it.

“It’s been a very nice relationship with PointsBet — we’ve been very happy with that,” Hawthorne Race Course CEO Tim Carey said at the sportsbook debut at Crazy Pour, approximately 20 miles west of Chicago. “I think by looking at the three [OTBs], what’s it done for us is exposed us more than what we would’ve done on our own.

“By the fact there’s sports betting in general, we want new people into the racetrack as well as the OTBs, which is important to us. That was the whole idea behind the legislation, to introduce new people to horse racing. I think we’ve done that through the relationship with PointsBet.”

The window through which Carey and his group have viewed sports wagering is one of a bigger picture for the family-run track. The 2019 gaming expansion bill Illinois Gov. JB Pritzker signed that legalized sports wagering also permitted horse racing tracks to pursue the option of acquiring a casino license and build racinos that offer full-on casino gaming.

The decision by Churchill Downs Inc. not to pursue such a license for Arlington International Racecourse — it instead purchased a majority stake in Rivers Casino in nearby Des Plaines — started a massive ripple effect that continues to have reverberations for both the city and state. Most notably to Carey and Hawthorne, they are essentially being counted on to save the horse racing industry in Illinois. 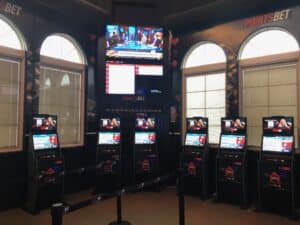 Crazy Pour was not originally on the list of locations Hawthorne had in mind for its three OTB locations, but that also was because it was technically not available to the track when it began making plans. It was originally an OTB connected to Arlington, but when Churchill Downs opted not to pursue a racing license in 2022 as part of its plans to sell the property that housed the iconic track, the Illinois Racing Board denied the Kentucky-based company a license to offer off-track betting.

Hawthorne then spent 2022 methodically adding to its holding of OTB locations, pushing up against the state-allowed maximum of 16. Crazy Pour was one of those locations, with the atmosphere in Villa Park enough to convince Carey and his team to relocate the third sportsbook location over Oakbrook Terrace.

“I think it’s all about management and how they ran the place,” Carey said about Crazy Pour’s management group, which includes Enzo’s Pizza. “It was [Hawthorne assistant general manager] John Walsh that introduced us to these guys and they do a tremendous, tremendous job. [They] know how to run a business, and as soon as we sat down with them it was evident that customer service was important to them.

The sports wagering section at Crazy Pour can be found within steps of the entrance, in a room that contains eight self-serve kiosks and three teller windows. The bar’s six video gaming terminals are also located there, giving patrons a distinctive all-in-one retail betting experience.

Progress on the racino front

The OTBs with sports wagering offer Hawthorne the opportunity to attract both younger and different demographics. PointsBet’s history in Australia as a top horse racing wagering book also helps, with Carey watching two distinct groups of bettors co-mingle and cross over into the other.

“I think to a degree and until we get the racino up, it won’t be where we think it is,” Carey said about getting more bettors who come to place wagers on sports and horse races versus only one of those. “The OTBs are supporting that concept with the three, but once we truly get a real sportsbook up and running and the racino up and running, I think then we will see the true impact.

“Especially from a simulcast standpoint when there’s races going off so much,” added Dakota Schulz, Hawthorne’s director of marketing and communications. “At a track, there’s a race going off every 25 minutes, but at a simulcast it’s, ‘Oh, Oaklawn is going off in seven (minutes), Tampa’s going off in 17.’ The way sports betting companies are pushing the in-play, in-game action? There’s an equivalency in racing, because there’s a track getting ready to go.”

All of this, of course, is prelude to the racino planned in Stickney. Hawthorne was deemed preliminary suitable by the Illinois Gaming Board in July 2020, which allowed it to begin construction and ground work on-site. Between the after-effects of the pandemic and economic headwinds that have only recently started to lessen, Carey is hoping to present updated plans to the IGB at the next meeting slated for February after having done so with the racing board in September.

“We’re a small business, we’re not a gaming company that’s doing Waukegan, that’s doing Rockford, that’s doing Chicago,” Carey said. “You can argue that if it wasn’t for us there wouldn’t be any type of harness or thoroughbred racing in Illinois. As part of that, we’re doing everything we can getting that racino up and running. We are in a 100-year pandemic, supply chain, inflation, and a small family business. All those combined make it difficult.

“I see opportunity going forward,” he added, “I don’t see it being a challenge just because there’s so much we want to do, and I think there’s so much growth in horse racing. I think because of the racino and because of the OTBs and the way we’re going to market this thing, I don’t see that as being truly a challenge. That’s why we’re working as hard as we are, so I view the future of what we’re doing as an opportunity.